“guangzhou municipal government attaches great importance to the biomedical industry, and really has the determination to take it as a pillar industry.” on the day of signing the contract, kouji murota, ceo of kyoto icap, expressed his hope for future cooperation with icap and other enterprises in guangzhou. “we and icap are planning a project, sino-japanese biomedical industrial park. it is hoped that the enterprises we have invested will be able to settle in guangzhou with cutting-edge technologies of the nobel prize in 2012, and take advantage of guangzhou's unique advantages and policies to cultivate themselves. these companies are very interested in the chinese market.” 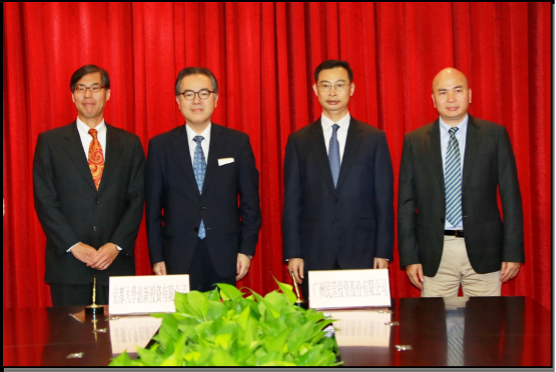 wen guohui, mayor of guangzhou city (the second from right) and hideki ishizuka, consul general of the consulate-general of japan in guangzhou (the third from right) witnessed the signing activity between kouji murota, ceo of kyoto icap(the fourth from right), and zhang chaomin, chairman of icap (the first from right).

the huge chinese market, with its rapidly increasing purchasing power, has become a stage for global competition for advanced technologies and high-end products. kouji murota said he is optimistic about the chinese market, which is also why the company hopes to land in guangzhou and conduct cooperation with guangzhou municipal government and excellent enterprises.

long project cycle and large investment are the biggest obstacles for capital to enter the field of biomedicine. kouji murota said that tasuku honjo, professor of kyoto university, is one of the winners of the 2018 nobel prize in physiology or medicine and that the collaborative project with ono pharmaceutical took him 22 years for the product to hit the market. he said, “if we can make use of the resources of guangzhou, speed up the listing in the chinese market, and partially reduce the cost and expense of clinical technology, we believe that the biomedical industry will develop better, which is also the request of the company to the guangzhou municipal government.”

after signing the contract, icap and kyoto icap, as the only partners in the field of biomedicine in guangzhou, participated in the first china-japan third party market cooperation forum organized by the national development and reform commission and the national commerce commission. the cooperation project was included in one of the 52 key projects of sino-japanese cooperation.

according to the strategic cooperation agreement, icap and kyoto icap will cooperate in a wide range of areas of technological innovation commercialization, and strengthen the exchange and interaction of industry technology development, market evaluation and capital channels to create greater commercial value.

kouji murota said that kyoto icap and icap prepare to establish an international biomedical industrial park. “with an industrial park project, there will be a better environment for the biomedical project to settle in china. i believe more companies will be willing to develop in china.”

at the industrial upgrading and financial support sub-forum seminar of the first china-japan third-party market cooperation forum, icap communicated with the china development bank, the export-import bank of china, japan bank for international cooperation and sumitomo mitsui banking corporation on the sino-japanese biomedical industrial park project. the banks of the two countries expressed great cooperation expectations for the project. it is expected to promote the joint investment of the sino-japanese biomedical industrial park projects by the banks of the two countries.

it is reported that icap, as an important organization and force for the guangzhou municipal government to promote the development of private capital, has led a number of sino-japanese partnerships. at present, icap, with its shareholder hybio pharmaceutical co., ltd., jointly invested in the acquisition of the gout treating project of japanese listed company fujifilm holdings corporation, and settled the project in guangzhou.

ⅲ. industrial foundation: guangzhou will create a platform for the exchange of biomedical industries between china and japan.

the successful signing of the cooperation between icap and kyoto university venture capital is also a litmus test to the development of guangzhou’ s biomedical industry and environmental construction.

according to introduction of icap, prior to the first china-japan third party market cooperation forum, kyoto university delegates were still hesitant about whether to attend. however, after meeting and exchanging with representatives of the guangzhou municipal government and participating in the forum, the representative of kyoto university offered to invite professor tasuku honjo to act as the general consultant of the sino-japanese biomedical industrial park this year.

industrial base and policy environment have become the reasons why more and more international biomedical projects are preferred in guangzhou. kouji murota further indicated that if international biomedical industry park can establish clinical research and development centers, obtain clinical data, and make clinical technology quality up to standard, there would be a large number of overseas enterprises willing to develop here.

wen guohui, mayor of guangzhou (the right one) and kouji murota, ceo of kyoto icap (the left one).

infinite capital holding company (icap) is an enterprise organized by guangzhou municipal government, and composed of 53 publically traded a-share listed companies in china including wondfo, hybio, blueon, and shangpin home collection. the shareholders are mainly from emerging industries in the field of bioscience, artificial intelligence and information technology.