the main business of the company has grown at a rapid speed and the company's assets have also increased. as of the end of 2019, the total assets of 37 interactive entertainment was worth ¥10.145 billion rmb, another record high.

following the successful fiscal year and after careful deliberations among the board of directors, the company intends to distribute cash dividends of ¥3 rmb (including tax) to every ten shares for all shareholders. this distribution of profits totals ¥636 million rmb. with mid-year dividend included, the 2019 annual cash dividend amounts to ¥845 million rmb (including tax).

the driving influence for the impressive performance in net profit and revenue growth can be contributed to the rapid development of the company's mobile game business. in 2019, the company's mobile game business achieved a revenue of ¥11.989 billion rmb, a yoy increase of 114.78%. li yifei, founder and chairman of 37 interactive entertainment, said in an interview with the media that 2019 was going to be the company's "product year". in addition to the increase in the number of products and the improvement in quality, the company is diversifying its products in various genres. according to the annual comprehensive analysis of china mobile game market 2020 report drafted by analysys, the market share of the company's domestic mobile game business increased to 10.44% in 2019, further extending its advantage in mobile game publishing. during the reporting period, the mobile games published by the company achieved a monthly revenue of ¥1.6 billion rmb. the highest monthly registration reached 34 million users. the highest monthly active users reached 40 million.

2019 is also a self-development year for 37 interactive entertainment . 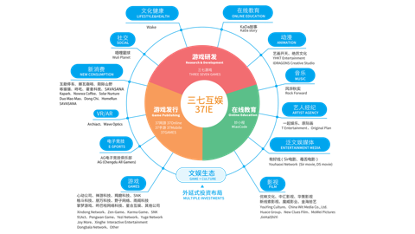 in terms of r&d, the company continues to increase investment to implement the strategy of specializing, diversification and globalization. 37 interactive entertainment continued to exert its strength in research and development by increasing investment in r&d to ¥820 million rmb, a yoy increase of 52.57%. r&d staff increased from 1,379 in 2018 to 1,582 in 2019, with more senior r&d staff members joining the company. while continuously improving performance and workflow processes, the company has also made some progress in diversifying its r&d business. in 2019, the company released various new products, such as simulation games, card games, slg, etc. it has promoted and released several self-developed simulation games in overseas markets. card game project dl is expected to be released in 2020. the company also carried out preliminary market research and analysis of the slg genre, and has already established a project.

37 interactive entertainment will continue its three-dimensional marketing, precision advertising, and long-term customer service model. the company's self-developed intelligent ad platform "quantum" and operation analysis platform "destiny" are already in use. "quantum" can connect to all mainstream channels and make happen rapid launch and automated launch. it can also process standardized projects in batches and maintain the project automatically and systematically. based on given information, "quantum" can increase the efficiency by 250%. for the operations team, "quantum" can more intelligently and accurately show the actual effect of material creativity. "destiny" is a comprehensive operational decision system for statistics, analysis and prediction of game data. the system can accurately predict the life cycle of games through data analysis models. it supports operation teams to adopt differentiated event marketing based on user data, so that customer service can focus on higher value user services to generate more revenue.

while maintaining the company's competitive advantage of the domestic mobile market, 37 interactive entertainment continues to increase its efforts in expanding into overseas markets. the company has consolidated its dominant position in the asian market through the production of high quality games and localized marketing methods. during the reporting period, a number of games released by the company achieved excellent results. snk all star (snkオールスター)  launched in japan and rose quickly to the top of the google play and app store download chart. archangel h5 was ranked no.1 on top grossing chart in vietnam.

numerous titles of various genres are  expected to launch in 2020. project glory, project nb, project dl, project hero, project slg and up to 30 high quality games will be released in the domestic market. as for overseas market, the company is expecting to publish around 20 high-quality games. the company will continue consolidating its dominant position in the asian market. in addition, the company plans to achieve breakthroughs in european and american markets through a variety high-quality slg games such as wild frontier, project sx, and project fo.

with the improvement of the company's r&d and publishing capabilities, the company estimates that the revenue in overseas markets for 2020 is expected to increase compared to 2019. during the first quarter of 2020, 37 interactive entertainment's mobile games business performed very well. the estimated net profit is expected to be approximately ¥700-750 million rmb, with a yoy increase of 54.06%-65.06%.

at the same time as the annual report was released, 37 interactive entertainment published a pre-arranged plan on private issuing of stock in 2020. the announcement reveals that the company will raise up to ¥4.5 billion rmb to invest in "online game development and operation of the projects", " 5g cloud services for games" and "guangzhou headquarters building construction project".